Add An Event Free Advertise with us

There will be no postponement for weather!

Outlined below is the outline timetable for the Jarl Squad for Tuesday morning:

09:40 Leave British Legion and march along Esplanade, along Commercial Street pausing at the Bill located at Market Cross. Finish at Bressay Ferry Terminal for photos; please note area is cordoned off for official photos.

Throughout the rest of the morning and early afternoon there are a series of visits to the Primary Schools, Hospitals and eventide homes with some lunch in between.

19:15 Guizer Jarl Squad passes up the ranks of the Guizers

The timetable will be confirmed nearer the festival – watch this space!

The official and souvenir programmes are available to buy in local shops such as:

The Proclamation also known as The Bill

The Galley is part of the marching in the morning. Once it arrives at the Bressay Ferry Terminal it remains there until 18:00 when it is taken to the Hillhead in preparation for the procession. 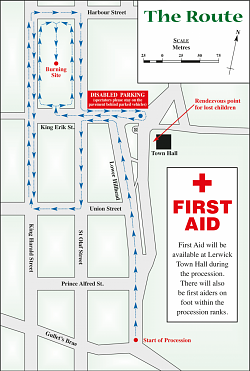 The procession will light up at 19:30 on the Hillhead (below the Town Hall) and proceed along the route map (right).

This information will be added to this website after the event. It is a secret until then!

“There will be no postponement for weather”. That’s a defiant boast by Shetland’s biggest fire festival, considering it’s held in mid-winter on the same latitude as southern Greenland. But it’s true: gales, sleet and snow have never yet stopped the Up Helly Aa guizers of Lerwick from burning their Viking galley – and then dancing the dawn away.

Up Helly Aa is a superb spectacle, a celebration of Shetland history, and a triumphant demonstration of islanders’ skills and spirit. This northern Mardi Gras, run entirely by volunteers, lasts just one day (and all the following night). But it takes several thousand people 364 days to organise. Much of the preparation is in strictest secrecy. The biggest secret of all is what the head of the festival, the ‘Guizer Jarl’, will wear and which character from the Norse Sagas is represented.

The Latest Events in Shetland,
Direct to Your Inbox

Don’t miss out, subscribe to our mailing list to be kept up to date with the latest events and happenings around the isles. Don’t worry we will never share your email address with third parties and it’s easy to unsubscribe from the list at any time.